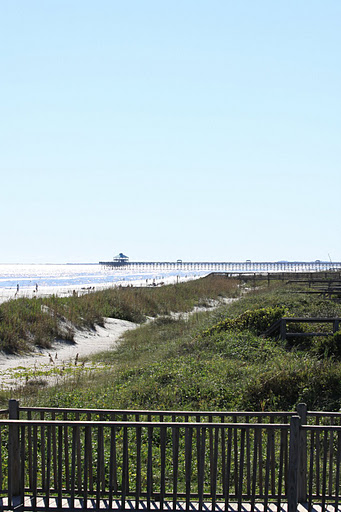 All this vegetation helps hold the dunes in place and controls erosion on Folly Beach; image by ©Cian

The hurricane season here lasts from May 15 to November 30. This year, we were lucky to have another mild one in which we avoided a direct hit from any major storms. But as WCSC, one of Charleston’s local television stations, reported, Hurricane Irene did cause some erosion and other damage to area beaches, including Folly Beach. The combination of the hurricane in August, a full moon during the same time and exceptionally high tides caused severe erosion to Folly Beach County Park, closing it for the foreseeable future.

But it could have been much worse, according to WCSC’s report, had it not been for efforts of the Army Corps of Engineers and its Flood and Coastal Storm Damage Reduction Program. The Corps manages nearly 100 shore protection projects throughout the United States, including flood control and beach re-nourishment projects throughout the Lowcountry. One strategy used to protect homes on Folly Beach and other parts of coastal South Carolina is planting sweetgrass and other plants behind the sand dunes (which provide storm surge and wind damage protection) to help hold them in place. The Corps planted 3,600 sweetgrass plants on Folly Beach in 2005, and since then, the grass has helped anchor the sand dunes, thereby reducing erosion problems.

Sweetgrass (Muhlenbergia sericea) is an evergreen sea grass that is native to coastal North and South Carolina, Georgia, Florida and Texas. In the fall, it has striking purple blooms, and it is becoming a popular landscaping plant because it is hardy and drought resistant. Sweetgrass is also used to make the baskets that have become iconic of Charleston. The tradition of sweetgrass basket making dates back three centuries. The craft was brought to the Lowcountry with the importation of enslaved peoples from the Rice Kingdoms of West Africa. The tightly coiled baskets were used in rice harvesting to separate the rice grains from the chaff. Today, the baskets are a folk tradition and an artform recognized worldwide.

Coastal development in the Charleston area has diminished the supply of sweetgrass, meaning that many sweetgrass basket weavers have had to travel to Georgia and Florida to harvest the resource. And the lack of sweetgrass exacerbates erosion problems along the coast. Besides the Army Corps of Engineers erosion control project, the Citadel has conducted research on the plant and cultivates it on Apron Island off the coast of Folly Beach. In 2010, sweetgrass was planted on Daufuskie Island on a large scale for conservation purposes and an extensive study is underway to gather planting and propagation information.

Sweetgrass makes an excellent plant for yards in the Lowcountry as well. Because it is native to the area, it is low-maintenance and will not require a large amount of water — an excellent quality for water-conservation-minded gardeners. The plant is readily available at local nurseries, but be sure to check that it is local sweetgrass, as plants from other states do not fare well here; you may want to specify the species just to be sure (Muhlenbergia sericea). Sweetgrass likes well-drained, nutrient-starved soil and full-to-partial sun. If you have a problem area in your yard where nothing else will grow, chances are that it is a good spot to plant sweetgrass.

An excellent fact sheet on growing sweetgrass in the Lowcountry can be found here.