Folly Boat and Other Landlocked Landmarks

Sometimes, in the midst of devastation, an old boat washed ashore during a hurricane or a lonely tree can become  icons. Inspired by the recent cleaning of the Folly Boat, we visit boats that seem more at home on shore than in the water and other unique local landmarks.

The Folly Boat
If you’re heading to Folly — be it for vacation or property hunting — there is one thing that will likely catch you’re eye. Everyone traveling to the island passes this landmark: Known as the Folly Boat, the landlocked vessel at the side of the marsh on Folly Road has become an ever-changing canvas for area residents who come year round with paint and brushes in hand to decorate the boat. The graffiti is sanctioned — even encouraged — by the city of Folly Beach.

And the boat was in the news last week as it became obvious that years of paint layers needed to be scraped off the landmark, revealing a clean canvas, and preventing the rubbery paint layers from making their way into the marsh. The Folly Boat has been a landmark since Hurricane Hugo washed it ashore in 1989. When no one moved the boat, locals started painting it and the tradition hasn’t waned since.

Perhaps it’s just part of living on the coast — a way to empower ourselves in the face of the destructive potential of hurricanes, a way to commemorate the storm and to memorialize what is lost. The Folly Boat is not the only boat washed ashore during Hurricane Hugo that has made a name for itself.

The Richard & Charlene
Over in the Old Village of Mount Pleasant, there is the lasting legacy of another boat landlocked by Hurricane Hugo: the Richard & Charlene. The R&C was a shrimp trawler that was purged from the water and onto pilings of a Shem Creek dock by Hurricane Hugo. The ruined boat remained here until the following summer, but even after it was removed, its image remained in the memories of residents. In 1994, a seafood restaurant in close vicinity to the wreck was opened. Named in memory of the doomed boat and the storm that sealed its fate, the Wreck of the Richard & Charlene — more conveniently known as the Wreck — still serves some of the best seafood in Charleston. It’s located in a humble fish camp overlooking Shem Creek, and while it’s namesake is no longer present, the restaurant includes another wrecked boat on its property — the Great Aunt Margaret. 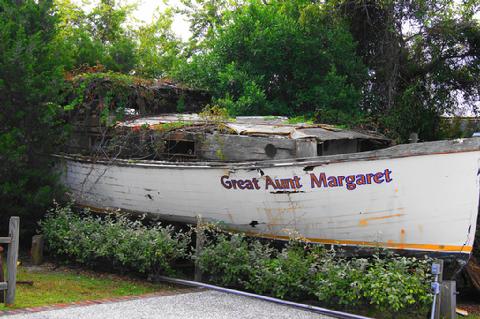 The Ghost
There is another boat we couldn’t resist mentioning, although not in the Charleston area. The Ghost sits on Earhart Boulevard in New Orleans, landlocked after Hurricane Katrina. Like the Folly Boat, the Ghost is decorated by local residents. In this case, paint, Mardi Gras beads and pair of high-heeled legs adorn the landmark. Not sure if this one is still there, but if anyone is local to the Central City, New Orleans, area or knows anything about this iconic boat, please post a comment.

The Mystery Tree
We’ll conclude this story with a look at the Edisto Island Mystery Tree. Edisto Island is a rural part of Charleston County with a gorgeous natural beach, and on the way to the beach off Highway 174 is another well-known landmark — not a beached boat, but a scraggly tree standing alone in the midst of the marsh. The tree comes with several stories: some say that after the devastation of Hurricane Hugo, it was decorated for the holidays as a measure of hope and happiness. Others say it is a spirit tree — a memento of slavery decorated with brightly colored memorabilia that will ward off the evil spirits lurking around the nearby plantations. On the map below, the Mystery Tree is barely visible; it looks like a pole off in the distance. If you click the “view larger map”, link, you will be taken to Google maps where several pictures of the tree in all its glory are posted.

Conclusion
If this slice of coastal life has you wanting to know more about the area, please feel free to drop us a line with any questions you may have. Also, let us know about other similar coastal landmarks you have encountered.