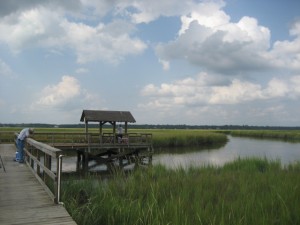 If you want to be close to Folly Beach, but don’t want to live on the island, you have several options. James Island, Johns Island and even West Ashley are great residential real estate enclaves that keep you close to Folly Beach while saving you a little bit of money. The median and average prices in these three markets are under $300,000.

James Island is adjacent to Folly Beach with some property situated only 10 minutes from the ocean. Also, some properties boast deepwater access. James Island real estate has had an excellent first two quarters in 2013. The number of closed sales as of June 2013 is up more than 46% for a total of 288 sold homes. The median price of single-family real estate in the area is $240,500, and the average price is $276,141. This represents a 6% to 7% gain in pricing from last year. Sellers are receiving almost 93% of their asking price, and homes are selling in about 81 days. The inventory situation on James Island is not quite as dire as other Charleston areas. With new listing activity up 38%, the number of homes available in June was 199.

Over from James Island is the more rural Johns Island. You’ll find a lower population density and larger lots and homes, but a longer commute. So far this year 132, homes have sold at an average price of $280,527, which is up 2.5% from last year. The median price for Johns Island single-family real estate is $229,523, which is 9.3% more than in the first two quarters of 2012. Buyers are paying 98.6% of the list price, and homes are spending 55 days on the market. In June, 159 homes were for sale.

West Ashley is more in-town than Johns Island and the most affordable residential area of the three. Some parts of the Charleston suburb — the older sections to the east of Interstate 526 — are quite close to Folly Beach. In the first two quarters of 2013, closed sales jumped more than 50% to 578. The median single-family price climbed 1.6% to $216,000, and the average price gained 5.1% to hit $235,717. Real estate is selling at about a 6% discount from the list price. During the same period last year, the discount was 8%. Homes are spending about 66 days on the market. The June inventory of 336 homes is off from last year by about 16%.

Reach out to Bob Brennaman for further details on these Folly Beach suburbs and other real estate hotspots. Several Charleston-area enclaves boast homes priced under the $300,000 range with excellent amenities and convenient locations.